Fumonisin Investigation in Cereals and Complete Feed Around the World

1. Introduction
The initial mycotoxin contamination of grains and compound feeds can occur at the crop farm (before or during harvesting) or during storage, transportation, feed manufacturing, and even at the animal farm prior to consumption by economic animals (e.g., swine, poultry, or bovine) [1]. Mycotoxin contamination may also be influenced by the combination of feedstuff, thus affecting the final contamination in animal feed [2]. Therefore, it is important to keep accurate records of the concentration of mycotoxins in raw materials and animal feeds before economic animals are exposed to them. Over the past ten years (from 2008 to 2017), DSM’s survey was observed that 88% of samples were contaminated with at least one mycotoxin in an investigation involving 100 countries of worldwide [3]. A similar percentage was observed in an eight-year (from 2005 to 2011) DSM’s study comprising 82 countries of Europe and Asia, where 72% of samples were contaminated with mycotoxins [4]. Based on the surveys that Vetanco has been carrying out since 2016 in cereals throughout Latin America [5], the percentage of cereals contaminated with one or more mycotoxins has remained stable at an average of 84% between 2016 and 2020, but during 2021 an increase in prevalence to 93% positivity has been observed.

2. Global Fumonisins Occurrence
Fusarium fungi are the most prevalent toxin-producing fungi of the northern temperate regions [6]. Infestation of maize and corn with Fusarium and consequent fumonisins (FUM) contamination is facilitated by high temperatures and low precipitation around silking [3,7]. For this reason, that regions with a hot climate such as South America, Central America, Sub-Saharan Africa or Southern Europe showed particularly high levels of FUM contamination in various investigations [2,3,5]. According to DSM’s global mycotoxins survey in animal feeds and raw materials over a ten-year period (from 2008 to 2017), the Fusarium mycotoxins deoxynivalenol (DON) and FUM were the most and second most positive rate of mycotoxins and were detected in 64% and 60% of feed ingredients and animal feeds, respectively [3]. Fumonisins resulted in the highest median concentrations (at 723 μg/kg) of cereals and complete feeds compared to other mycotoxins. More specifically, FUM and DON achieved the highest mycotoxin positive rate among finished feed, maize, and maize distillers dried grains with soluble (DDGS). In maize, FUM show a higher prevalence (80% positive samples) and a higher median value (1,300 μg/kg) than in any other animal feed or cereals. Similar to maize, maize DDGS and finished feed showed a high prevalence of FUM (78% and 73% of positive samples, respectively) at a median concentration of FUM (840 μg/kg and 555 μg/kg, respectively). In the case of finished feed and maize in the DSM’s global survey, the combination of DON and FUM is the most frequently observed with positive rates of 48% and 49%, respectively. Vetanco’s Latin America survey over a one-year period in 2021 arrived at similar but slightly different results, namely that FUM and aflatoxins (AFLA) are the most prevalent mycotoxin combination of balanced feeds and feed raw materials [5]. It is worth noting that FUM is present in the most prevalent mycotoxin combination in both surveys. Clearly, FUM not only have high positive rates but also have higher concentrations than those of other common mycotoxins; this means that feed mills and farmers should be vigilant in monitoring the rate of FUM in animal feeds and feed ingredients.

3. Asia
Fumonisins is among the most common mycotoxins in all regions of Asia in multiple surveys [1,4,8]. The positive rate of FUM in Southeast Asia was the highest among the Asian regions, and followed by the East Asia, which belongs to China and Taiwan. Besides, FUM most often co-occur with AFLA in feed ingredients and complete feeds of these two regions [9].

3.1 South Asia
The Southern sections of Asia are mild to hot, and the temperature is suitable for AFLA and FUM production. Therefore, the DSM survey (from 2008 to 2017 and 2021) indicated that FUM was the second most prevalent mycotoxins after AFLA in South Asia, having been detected in 69 to 74% of the animal feeds and feed ingredients with a median concentration of about 288 μg/kg [3,9].

3.2 Southeast Asia
Fumonisin contamination is similarly related to weather conditions favoring crop contamination [10]. The effect of weather conditions on FUM occurrence was observed in a trend of increased incidence across different mycotoxins in Southeast Asia, as severe rainy and dry seasons were observed in the same period [8]. In the DSM global survey (from 2008 to 2017) [3], FUM was the most prevalent mycotoxins in animal feed of Southeast Asia at a positive rate of 69.6% and a median concentration of 573 μg/kg. In 2021, the highest positive rate of mycotoxins was still FUM, but their prevalence (86%) had increased significantly compared to previous records [9].

3.3 East Asia
East Asia has a temperate climate which induces Fusarium mycotoxins DON and FUM to be produced in large quantities [11]. Fumonisins is the second most prevalent mycotoxin in the East Asian dataset, with 60.7% of positive samples and a relatively high median concentration of 810 μg/kg in the DSM survey (from 2008 to 2017) [3]. The occurrence of FUM was increasing yearly, and by 2021, the positive rate of raw materials and balanced feeds reached 74% [9]. Due to the high risk of FUM to humans and animals, China authorities set the limit values for FUM, comprising the sum of FUM B1 and B2 at 5 mg/kg, 20 mg/kg, and 50 mg/kg of balanced feed for swine, poultry, and ruminants, respectively [12].

3 .4 Central Asia
Compared to other regions, fewer investigations have been conducted on the mycotoxin status of animal feeds and feed ingredients in the Central Asia. According to the available data, DON and FUM are the first and second most frequently-occurring mycotoxins in the cereals and animal feeds of Central Asia, respectively. In the DSM global survey (from 2008 to 2017), the positive rate and median concentration of FUM were 25% and 13 μg/kg, respectively [3].

4. Europe
Except for southern Europe, the rest regions of Europe have a lower FUM prevalence than other regions of global due to climate factors [3,4,9]. The advisory levels set for FUM comprises the sum of FUM B1 and B2 at 5 mg/kg, 20 mg/kg, and 50 mg/kg of balanced feed for swine, poultry, and ruminants in the European Union, respectively [8].

5.1 North America
Fumonisins was the second most prevalent mycotoxins after DON in feed ingredients and animal feeds from North America, detected in 47 to 50 % of the samples and the median concentration is about 652 μg/kg in the DSM survey (from 2008 to 2017 and 2021)[3]. In grains and complete feeds as a whole, the occurrence of FUM maintain a stable trendy. If only focus on the status of corn, DON (70%) and FUM (69%) were most prevalence mycotoxins in 2021 of DSM survey and average concentrations of DON and FUM increased compared to 2020 [9]. The limit values set for FUM comprises the sum of FUM B1, B2, and B3 at 10 mg/kg, 30 mg/kg, and 50 mg/kg of balanced feeds for swine, ruminants and poultry in the United States, respectively [13].

5.2 Central America
In samples of the DSM global survey (from 2008 to 2017) from Central America [3], FUM was the more prevalent mycotoxins as well as the positive rate from this region is higher than in samples from any other region. It was detected in 81.8% of samples at a relatively high median concentration of 929 μg/kg. Fumonisins still was the most prevalent (70%) of all samples from this region in the DSM 2021 survey [9]. However, the positive rate has dropped from the previous DSM research. Contrast to DSM study, Ventanco survey [5] indicates FUM was the second most prevalent mycotoxins in this regions, detected in 62.6% of the samples and the average value is 1,581 μg/kg in 2021.

5.3 South America
In the South American dataset of the DSM survey (from 2009 to 2017) [3], FUM was detected in a high fraction of samples (75.3%) at a median concentration of 1,390 μg/kg. This was the highest median concentration obtained for FUM in any region. Furthermore, 8.4% of the samples exceeded the lowest European Union guidance value for FUM, with 0.2% of the samples exceeding the highest European Union guidance value. Fumonisin concentration in maize was particularly high in 2009 and tended to increase between 2012 and 2017. In the DSM 2021 survey, FUM remains the mycotoxins with the highest positive rate (61%), even reaching a maximum of 83,800 μg/kg in corn of Argentina [9]. Nevertheless, the occurrence of FUM is lower than in DSM’s previous survey. Fumonisins occurrence (61%) in the Ventanco 2021 survey [5] was similar to the DSM survey in the same year, as well as the average concentration of 1,609 μg/kg. 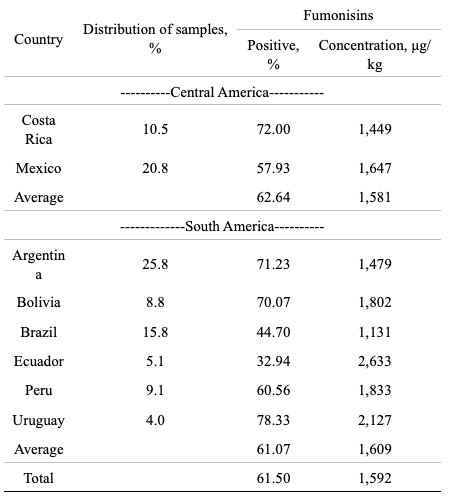 6. Africa
African countries, whose climate is characterized by high temperatures and high relative humidity in some areas, seem to stimulate toxigenic mold growth and toxin genesis in cereals and cereal-based products, which represent a staple feed for economic animals [14].

6.2 Sub-Saharan Africa
In the DSM survey (from 2008 to 2017), FUM was the second most prevalent mycotoxin in this region, following AFLA, and was detected in 72.6% of the balanced feeds and cereals at a median concentration of 789 μg/kg [3]. In 2021, the highest occurrence changed to FUM (76%) followed by DON (61%), and FUM prevalence has been stable for years, with over 70% positivity [9].
6.3 South Africa
Fusarium mycotoxins DON and FUM were the highest and second highest occurring in South African samples of the DSM survey (from 2008 to 2017) and yielded positive rates of 63.2% and 62.6%, respectively [3]. It should be noted that FUM level in maize was high, and DON concentration was low in samples from 2016. However, DON prevalence in feed ingredients and animal feeds reached 84%; on the contrary, FUM prevalence decreased to 48% in 2021 [9].

7. Oceania
Oceania is generally hot and humid year-round; the weather conditions are suitable for Fusarium mycotoxins to grow. In animal feeds and raw materials from Oceania, DON and FUM were the most frequently detected mycotoxins in the DSM survey (from 2008 to 2017) [3], with 34.5% and 22.2% of positive samples at a median concentration of 158 and 106 μg/kg, respectively. The prevalence of FUM increased to 51% and became the most prevalent mycotoxin in the 2021 DSM study [9].

8. Discussion and Conclusion
Most raw materials and complete feeds were found to be contaminated with FUM, yet very few samples exceeded the mycotoxin limits of the European Union and the United States for economic animals [3]. However, co-occurrences were widely observed, as well as increasing year by year, as 64% to 67% of samples contained two or more mycotoxins, and the presence of more than one mycotoxin at the same time in feed can lead to interactions. According to the DSM survey [3,9], the mycotoxins most frequently found as co-contaminants for corn and finished feeds were FUM and DON, for both global and regional assessments. Similar but not quite the same, FUM and AFLA were the most prevalent combination in raw materials and balanced feeds in the Vetanco Latin America investigation [4,5]. Both studies indicate the prevalence of FUM co-contamination in raw materials and balanced feeds. Consequently, FUM co-exposure in animals is the rule rather than the exception [15]. Therefore, it is essential that the combined toxicities of FUM and other mycotoxins be considered. In addition, climate change has been shown to directly affect the population of toxigenic fungi and mycotoxin levels in crops as well as indirectly impact the levels of co-occurring mycotoxin contamination. Fumonisin contamination in global feed ingredients and complete feeds will continuously increase due to climate change, including higher temperatures, increased rainfall, drought, and floods. For these reasons, it is extremely important to use broad-spectrum control tools to manage FUM risk.