Mycotoxins are toxic secondary metabolites of fungi that infect crops. More than 500 mycotoxins have been identified to be toxic to animals and humans, among which causing the most serious impacts being aflatoxin, ochratoxin, fumonisins, zearalenone, T-2 toxin, and deoxynivalenol [1]. Global climate change is associated with increased growth of mycotoxin-producing fungi in crops. Mycotoxins impact the health of animals and humans as well as the agricultural economy, and they have become a global issue [2]. In addition, mycotoxins can contaminate agricultural products in the field, during harvest, after harvest, and in storage. Even a controlled environment cannot completely prevent the production of mycotoxins [3].

Fumonisins are one of the most prevalent mycotoxins produced by fungi of the Fusarium verticilliodes and Fusarium proliferatum, these mycotoxins occur worldwide and are found predominantly in corn, maize, and corn-based animal feeds [4]. In addition to corn, fumonisins have also been detected in rice, sorghum, wheat bran, and soybean meal. Fumonisins are classified into four major groups: fumonisin A, fumonisin B (FB), fumonisin C, and fumonisin P, depending on the chemical structures [5]. Among them, FB1, FB2, and FB3 are most frequently found in crops and animal feed. Fumonisins were most commonly detected in South American (77%), African (72%), and Southern European (70%) samples [6]. The concentrations recorded vary enormously, with previous studies having observed different feed materials and animal feed containing up to 300 mg/kg of FB1 in Hungary and the United States [7,8]. The economic impact of animal feed is huge because previous research estimated the annual financial losses in the USA due to FBs in animal feed to be US$ 30–46 million in an outbreak year of Fusarium ear rot [9].

Fumonisins cause a variety of toxic effects to livestock and poultry, including poor growth, neurotoxicity, immunotoxicity, reproductive toxicity, and tissue and organ toxicity. They can not only cause diseases but also have a combined toxic effect with other mycotoxins. Previous studies showed that FBs get absorbed from the gastrointestinal tract and get rapidly distributed in blood. Most of the absorbed FBs accumulate in the liver and kidneys; therefore, they are nephrotoxic and hepatotoxic for animals [10,11].

Several studies showed that FBs poison to pigs, chickens, and other farm animals [1,12]. Due to the dissimilarities in the digestive processes of different animals, FBs have their own specific impact and tolerance on various animals consuming the contaminated feeds. In addition, the most toxic and most abundant group of FBs is FB1. Therefore, many toxicity studies and national regulations use FB1 as an indicator of FB [12,13]. The safety limit of feed set by China and the European Union for swine, poultry, and cattle are 5, 20, and 50 mg/kg of the total of FB1 and FB2, respectively. In contrast, the FB limits set by the Food and Drug Administration of the United States are more flexible: the total amount of FB1, FB2, and FB3 allowed for swine, milking ruminants, finishing beef cattle, and poultry are 10, 30, 60, and 100 mg/kg, respectively. These limitations indicate that poultry and ruminants are more resistant to FB toxicities than swine is.

The structures of FBs are similar to that of sphingolipids (sphinganine (Sa) and sphingosine (So)). Therefore, the main toxicities of FBs inhibit ceramide synthase and alter the Sa/So ratio in tissues and organs, which induces a cascade of organ toxicity, negative growth performances, and other toxicities in animals. Therefore, the Sa/So ratio is frequently investigated as a biomarker for FB intoxication. Corn contaminated with 5 mg/kg of FBs causes feed refusal in pigs, which is the first reaction of being exposed to FBs. Porcine pulmonary edema (PPE) specifically occurs solely in the lungs of pigs. In many countries (such as the United States), thousands of pigs have died from PPE after ingestion of FB1-contaminated corn. Pigs show respiratory distress and cyanosis that is rapidly followed by death due to acute PPE and hydrothorax within 4 to 7 days when given feed containing FB1 at concentrations of ≥ 92 mg/kg [14]. However, long-term exposure to 10 mg/kg of FB1 is also known to cause mild cases of PPE. Clinical symptoms, such as inactivity, increased respiratory rate, and decreased heart rate, occur approximately 12 hours before the development of PPE and death [15], vomiting and diarrhea also have been observed. At necropsy, significant edema of the lungs with yellow fluid deposits has been found in swine [16]. Cardiovascular effects are one of the most serious FBs toxicities in swine and have certain degree of correlation between the cause of PPE. Porcine pulmonary edema is the result of acute left-sided heart failure mediated by FB perturbation in the biosynthesis of sphingolipid, which is usually lethal [15].

Swine fed with high levels of FB1 died from pulmonary oedema, while those fed with lower levels of FB1 had sub-acute hepetotoxicosis, due to most of the absorbed FBs accumulate in the liver of swine; therefore, the liver is the organ in danger in case of toxicities with FBs-intoxicated pigs. Pigs ingesting FBs develop a hepatic injury that is dose- and time-dependent and can be detected as elevated hepatic serum enzyme activity and morphologic alteration [16]. Serum biochemical changes indicate hepatic necrosis, cholestasis, and decreased hepatic function. Intoxicated pigs display the following clinical symptoms when they develop severe liver diseases: anorexia, lower body weight, and moribundity [17].

Fumonisins also induced some characteristic changes which can be observed in the kidneys and brain of pigs, such as mild to moderate vacuolar of the renal proximal tubule and cerebral cortex. The kidneys and brains can also show signs of edema and congestion [18].

In the gastrointestinal tract (GIT), FB1 disrupts the intestinal barrier [19] by affecting the tight junction function. The impaired immune and barrier function makes the intoxicated pig more susceptible to Escherichia coli and Salmonella typhimurium [20,21]. Fumonisin B1 can also suppress the non-specific immune system of pigs, exacerbating pathogen infection. Some studies have shown that the administering 20 mg/kg of FB1 can complicate the infection process of Bacillus subtilis A and Mycoplasma pneumoniae, causing porcine respiratory disease [22,23]. 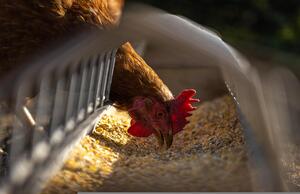 In general, poultry are considered to be quite resistant toward the deleterious effects of FBs. Laying hens and broilers are less sensitive to FBs compared to turkeys and ducks due to species differences [30]. In poultry, the highest concentration of FB1 was found in the liver, lower in the kidney than in the liver, and the muscles were the least contaminated [31]. Therefore, the major clinical symptom is hepatotoxicity and the consequent negative growth performances. Broiler chicks fed the diets containing FB1 for 21 days showed: weight loss (dose dependent), increased liver weight (dose dependent), liver necrosis (≧ 200 mg/kg), cortical atrophy in thymus gland (≧300 ppm) and biliary hyperplasia (≧100 ppm) [10,32]. Other signs were kidney and heart damage, black sticky diarrhea and ricket. In turkey poults and duck fed the diet containing FBs, similar changes to those in chicks were found. These studies indicate the level necessary to promote FBs toxicosis in poultry is > 100 mg/kg.

Poultry consume FBs contaminated feed, and the GIT is the initial organ to be exposed to these mycotoxins that induce adverse effects on intestinal tissues [33]. High levels of FB1 in the diets of poultry increase their susceptibility to and severity of Salmonella gallinarum and Clostridium perfringen infections as manifested by the marked intensity of diarrhea, subclinical necrotic enteritis, and higher mortality. In contrast, in chickens fed the FBs contaminated diet, the ileal digesta of the abundance of Candidatus savagella and Lactobaccillus johnsonii were decreased. It indicates that FBs affect the intestinal microbial homeostasis in broiler chickens, predisposing them to necrotic enteritis [34]. Many studies have also found evidence for the carryover of FBs into eggs in laying hens and ducks [35,36]. The effects of FB1 on poultry eggs indicate that FB1 is not teratogenic but may be embryotoxic at maternally toxic doses. It noted that FB1 contributed to poor hatching rate, and significant organ damage (such as gizzard ulcerations and hemorrhagic lungs) have also been detected even after the chicks hatch, leading to higher mortality of the progeny of breeder hens and threatening consumable egg safety [35].

Ruminants are considered to be less susceptible to negative effects of mycotoxins than monogastric, rumen microflora contained in rumen being effective in the biodegradation of these toxic chemical structures. However, in contrast to other mycotoxins, FBs are poorly degraded in the rumen, thus causing slower rumen motility and decreased feed consumption in cattle [41]. Because of greater production stress, dairy cattle may be more sensitive to FBs than are beef cattle. Major clinical signs of FBs poisoning in cattle are decreased appetite accompanied by serum biochemical and histologic evidence of hepatic damage [41]. Lactating dairy Jersey cows were fed a diet contaminated at a level of 75 mg/kg of FB1 for 14 days, increasing serum cholesterol concentration and decreasing feed intake and milk production [42]. Other research indicated that carryover of FBs from feed to milk in dairy cows was insignificant [12]. When Holstein calves were fed a diet with a contamination level of 94 mg/kg of FB1 for 253 days, increases in serum aspartate aminotransferase (AST) and γ-glutamyl transferase (GGT), as well as hepatocellular injury, were reported [43]. Similar metabolic changes, such as serum increase of AST, GGT, lactate dehydrogenase (LDH), bilirubin or cholesterol, and histological changes, were reported when calves were fed diets containing 105 mg/kg of FBs for 31 days [44]. In summary, diets containing 75 mg/kg of FB1 are hepatotoxic to cattle. Furthermore, necropsies of beef cattle having a sudden onset of blindness after grazing on standing corn contaminated with FBs revealed optic nerve degeneration and acute myelin edema [45]. Feeder calves showed signs of immunotoxicity in the form of significantly reduced lymphoblastogenesis [44].