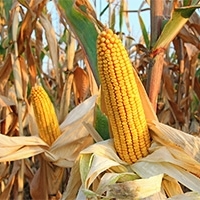 Climate change is a consequence of global warming, which causes the temperature of the planet to rise and creates climate variations [1]. Many studies predicted that different regions of the entire world are expected to face increases in temperature of 2 to 5 ℃, elevated carbon dioxide (CO2) to double or triple (from 350–400 to 800–1,200 ppb), and drought episodes in the next few decades [2-4]. These climate change events produce concomitant effects on crop yield and mycotoxin production, which in turn threaten agriculture and food security because they affect crop production and supply. The growth of toxigenic fungi and mycotoxin production depends on the interactions between the host, fungi, and environmental stresses [5]. These physiological stresses can be intrinsic or extrinsic and include environmental stresses such as temperature changes, humidity (e.g., extreme rainfall or drought), and CO2 variations [6]. Mycotoxin toxicities are poor growth performance; decreased reproductive ability; and immunotoxic, teratogenic, mutagenic, and carcinogenic effects, which could be deadly to both animals and humans [7-9]. Mycotoxin production may be even higher in countries and regions vulnerable to climate change since the risks fluctuate according to varying climate change rates [10]. In addition, the positive rate of more than one combination of mycotoxins in the feed ingredient and animal feeds is increasing year by year due to climate change [11]. Figure 1. Diagrammatic representation of the multidisciplinary approaches to examining impact of climate change and related factors on mycotoxin/plant interactions in maize [12].

Climate change is a worldwide challenge, especially for agriculture. Different regions in Europe will be impacted by the increases in temperature of 2–4 °C coupled with elevated CO2 (650–1200 ppm) and drought episodes having a profound impact on pests and diseases and ultimately cereal yields [14,15]. Similar impacts have been described in other areas of the world, especially parts of Asia, and Central and South America which are important producers of wheat, maize and soya beans for animal feed uses on a global basis [16]. The growth of toxigenic fungi and mycotoxin production depends on the interactions between the host, fungi, and climate condition [17]. Extreme weather events (e.g., high temperatures and drought stress) directly affect crops and the occurrence of mycotoxigenic fungi, favoring fungal growth, conidiation and spore dispersal, and impairing the growth and development of cereals [18]. In addition, many studies pointed out that the increase of CO2 levels in the air year-on-year may stimulate the production of mycotoxins [1,4].

Based on present available data, atmospheric levels of CO2 are expected to double or triple (from 350-400 to 800-1200 ppb) in the next 25-50 years [19]. Therefore, each region of the entire world will be impacted by the various levels of elevated CO2 issues. Some studies have shown that an increase in plant susceptibility to fungal attacks can occur due to elevated CO2 concentrations, for example, 2.5-fold proliferation rate of Fusarium verticillioides (fumonisin (FUM)-producing fungi) contaminated corn under high levels CO2 compared to no treated corn [20,21]. The concentration rate of CO2 is increasing in southern Italy, and studies have predicted that this could in turn trigger an increase in colonization rate by Aspergillus carbonarius and ochratoxin A (OTA) production in grapes [22].

The distribution of total precipitation is also expected to change due to global climate change. The precipitation will be increase in some regions (e.g., high latitude and tropical regions, and in winter in the northern mid-latitudes) and be decrease in other regions (e.g., Southern Europe and the Mediterranean regions, Central Europe, central North America, Central America and Mexico, northeast Brazil, and southern Africa) [23]. Extreme precipitation events can lead to spikes in mycotoxins, such as heavy rainfall leading to deoxynivalenol (DON) concentration levels increasing at harvest [24]. Besides, in stored grains, increased fungal damage and elevated levels of mycotoxins such as DON and zearalenone (ZEN) are associated with extreme precipitation events leading floods to cause silo damage [25].

Global warming increases water evaporation from the surface of the earth and allows the atmosphere to hold more moisture [26]. Therefore, global warming has been causing severe droughts for a long time, and when it rains, it is extreme rainfall [23]; these extreme climate events have occurred frequently in different regions of the world in the past twenty years. In Southern Europe, changes may increase of 4-5 ℃ with more extended drought periods, resulting in decreasing crop yields. In areas of Western and Atlantic Europe, changes of 2.5-3.5 ℃ with drier and hotter summers are expected. In Central Europe, an increase of 3-4 ℃, higher rainfall, and floods are forecasted to affect crop harvest negatively. Northern Europe would expect an average temperature increase of 3-4.5 ℃, with a significant increase in precipitation of 30–40% [1,27]. Warmer climates are favorable to insect growth, development, and reproduction, thereby increasing pest attacks on cereals, potentially leading to increases in fungal contamination and increased mycotoxin production levels [5,28]. In addition, if the grain storage equipment is not perfect enough to effectively control the ambient temperature and humidity after the grain is harvested, it will also cause a substantial increase in mycotoxins production [29].

3. The effects of climate change on mycotoxin occurrence

Previously, aflatoxins were limited by the high temperature and dry growth conditions of A. flavus, so the main AF-contamination areas were Sub-Saharan Africa and South Asia [30]. Until a few years ago, AF had not been signaled as a matter of concern for primary production in Europe [4]. Since 2012, many South-Eastern and Western European countries have experienced severe AF-contamination in corn due to exceptionally hot and dry climatic conditions, such as Serbia in 2012 [31] and France in 2015 [32], respectively. Remarkably, up to 69% of feed ingredients and animal feed in Serbia were contaminated by AF in 2012 [4]. In recent years, corn in Italy and other European countries has also suffered from severe AF-contamination [33]. Aflatoxin-contamination of crops in South-Eastern and Western European countries should continue to be monitored closely, as occasional high levels occur, and this may increase in the future due to climate change [34]. Besides, AF concentrations were particularly high in maize harvested in 2008-2011 and in 2017 in Southeast Asia. These higher AF levels may reflect the relatively high temperature in August and September these years leading up to harvest [30]. Noteworthy, there may be changes in mycotoxin prevalence among the same regions due to climate change as well. Many studies have predicted that in Europe in the next 50–100 years, A. flavus (AF-producing fungi) may outcompete A. carbonarius (OTA-producing fungi), with AF becoming a greater risk than OTA because the former fungi is better adapted to high temperatures and drier conditions than the latter fungi [35,36].

The same mycotoxin-producing fungi (Fusarium graminearum and Fusarium culmorum) produce DON and ZEN, and they are the most common mycotoxin combinations in cereal and complete feeds [24]; therefore, they are usually discussed together. Deoxynivalenol and zearalenone concentrations were exceptionally high in maize harvested in 2014 in Central Europe [17]. High concentrations of DON and ZEN corresponded with higher than usual rainfall in July 2014,during the main silking period of maize, ongoing relatively high rainfall in August, and moderate rainfall in September. High rainfall during the silking period could have facilitated the infestation of maize plants with Fusarium spp., whereas ongoing rain in the lead-up to harvest would have meant an extended period of suitable grain moisture levels for continued fungal growth and mycotoxin production within the grain [30,37]. Same as in Central Europe, DON and ZEN showed relatively high levels in Southern European maize harvested in 2014, which also coincided with heavier than usual rainfall in July and August. In East Asian maize, DON and ZEN levels were relatively low in maize harvested in 2013, which may reflect the relatively lower levels of rainfall in August and September (leading up to harvest) that year in the core Chinese maize growing areas compared to the following years. Overall, these observations confirm the importantimpact of rainfall on DON and ZEN contamination levels in maize [30].

The main reason for FUM contamination is the elevated temperatures and low precipitation around the silking period of corn, which increases the infestation rate of maize with F. verticillioides [38]. In the past, FUM occurrence was typically higher in hot climate areas, such as South America, Central America, or Sub-Saharan Africa, which showed exceptionally high levels of contamination [30]. However, in recent years, in Central Europe, FUM concentrations significantly increased in maize harvested in 2015. This could be related to warmer temperatures in July (during silking stage) and August (in the lead-up to harvest) that year than observed in other years. Furthermore, the amount of rainfall in July was lower in 2015 than in the other years. The sudden rise in FUM concentration observed in East Asian maize harvested in 2017 could be associated with relatively hot temperatures in the core Chinese maize growing areas in July of that year. In this case, the amount of rainfall was average compared to 2013–2016. In summary, FUM level increases in Central European and East Asian maize could be related to high temperatures during the silking period [30].

Ochratoxin A is mainly produced by Penicillium verrucosum and several Aspergillus species, including A. carbonarius and A. niger [22]. This mycotoxin has been found in a variety of crops, such as barley, grapes, rye, wheat, and coffee [39]. However, the narrow range of suitable water activity (0.95-0.8) limits OTA production [19]. Hence, OTA have been shown to occupy primarily tropical/subtropical regions growing at high temperatures and lowered water activity, such as Eastern Europe and some regions of South Asia [19,30]. In addition, changes in water activity and temperature may have less impact on A. nigri and low influence OTA contamination of grapes, crops and finished feeds. Therefore, as far as I know, there are few reports of climate change affecting OTA production in feed ingredients and compound feed. Only a few reports have found that elevated CO2 increases OTA production on grapes [40].

The previous study indicated that T-2 toxin (T-2) and HT-2 toxin (HT-2) contamination in oats is influenced by weather conditions both pre- and post-flowering [41]. In both periods, humid weather and low temperatures were associated with increased T-2 and HT-2 accumulation in harvested oat grains [41]. In the past, T-2 and HT-2 contamination issues only appeared in cool and humid regions, such as South-Western Ukraine, the Republic of Belarus, the Baltic countries, and Central and North-Western Russia [42]. However, in recent years, due to the global warming process, T-2 and HT-2 have been observed in common wheat in Poland, Eastern Europe, Western Siberia, and Northern Kazakhstan [43]. Grains and balanced feed from Northern Europe and Eastern Europe usually have a higher prevalence of T-2 and HT-2 compared to those of other regions in the past 20 years [30].

Economic losses due to mycotoxins are diverse and can be associated with poor quality of grains for economic animals [44]; reduction in animal production due to feeding refusal or diseases; increasing medical costs for toxicosis treatments; and increased costs to find alternative raw materials, design adequate management of contaminated supplies, improve detection and quantification methods, and develop strategies that reduce toxin exposure [6]. Previous research indicated that AF-contaminated corn and peanuts, FUM-contaminated corn, and DON-contaminated wheat resulted in estimated losses ranging from $0.5 million to over $1.5 billion for the United States [45].